Posted on June 29, 2014 by josephandmichelle

When Pacific storms slam into California they are liable to drop healthy amounts of rain along the coast before moving inland and getting relentlessly forced upward in to the Sierra Nevada Mountains. As the wet air is driven higher it becomes thin and unable to hold moisture, therefore causing it to condense into clouds. These clouds then condense into rain. Once the moisture gets high enough the rain turns to snow, lots of snow. The largest snow falls in a given winter storm are on average larger here than anywhere else in the United States. The air continues to rise because in the Sierras there is nowhere else for it to go but up. The Sierra Nevada runs like an impenetrable fortress wall down the eastern side of the state of California with peaks higher than anywhere else in the contiguous US. Only the burliest storms make it over the spine of the Sierra and then down the other side where the moisture evaporates and leaves just wind for the lonely basins on the  east side. What moisture does make it to the there is forced up once again over another range of mountains almost equal in height, only to go bombing down the other side even drier and further down until it bottoms out in Death Valley, the lowest, driest, and hottest place in the United States.

Our drive towards Death Valley took us through dreary and lonely looking desert valleys and over craggy desert mountains of the Basin and Range province. We crossed into California and soon after the border, into Death Valley National Park where we found ourselves starring down into a frightful giant tear mark in the earth’s surface. We continued to descend with feet working the breaks trying to keep our overloaded minivan happy in low gear.

The rock formations that the road twisted around were stunning. Stories of very ancient mountains were quickly laid out in the crazy scenery as we rushed onward. Even though the stretching of the Basin and Range began only 16 million years ago the rock that has been exposed is over a billion years old.  The elevation continued to drop until we hit sea level and kept descending. This big broad flat valley was made up of giant lakes back in the last ice age.  Now the water that leads down here heats up, evaporates and leads to nowhere. What’s left is salt, a vast flat expanse of salt. There are no major river ways that drain the Basin and Range Province. To put this in perspective, this entire region: eastern California, southeastern Oregon, southern Idaho, western Utah and the entire state of Nevada, is without a major river drainage. Mountain ridge lines collect snow and rain, it flows down hill like all water should but then poof, it’s devoured by the basins.

When we made it to a sign that read -150 below sea level, we parked our car in the salt flats and greeted the 100 degree heat. Curiously, we all walked into the sea of white salt and pulled shoes off to feel the comfortable crunch under our feet. The walking led to jogging and then regardless of the heat, to sprinting. You could run as much as you wanted in any direction and it would not matter if your eyes were open or closed. The crunchy white salt was uniform throughout the valley bottom. We played in the salt flats and our skin and spirits felt gritty and good. 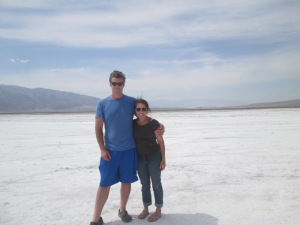 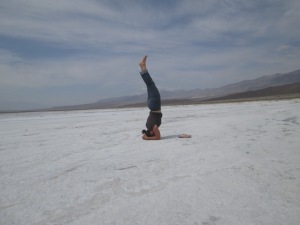 Back in the car we charged on towards our destination driving by towering sand dunes where Jacob pleaded with us to stop and explore. The temperature was even warmer when we got out and walking around felt like a huge effort. As we drove further and began the climb up and out of the valley the family was still, content with their books on tape or sleep as I quietly noticed warning signs that suggested we turn AC off so as not to let the engine overheat. The poor van pushed  4, 5 almost 6 thousand feet back up and out of the valley. The AC blasted as I thanked our faithful car for the big push. We continued down the other side on a road that cut through yet another lonely basin with nothing in it except the large expansive natural shape of the mountain and valleys flowing together as one with giant dunes on the northern end piled high just as it had been for several thousand years. 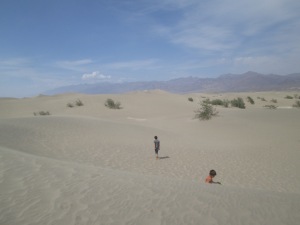 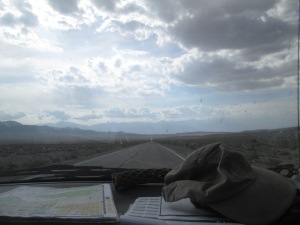 Michelle and I bonded without speaking with our hands and our smiles while we deeply absorbed the freedom of endless scenery. Topping out on the last mountain ridge the Sierra Nevada stood in front of us reaching up into the heavens. They reminded us that not all mountains look like these dry basin and range hills. Their steep noble mountain slopes were flanked with the beautiful clean look of granite walls and ridges. It was like a fortress of the heavens and we had finally arrived. Snow etched the stately and tall lines which lead up to the summits which were crowned with clouds. The first clouds we had seen for weeks.