Over 250 million years ago the world experienced it’s largest mass extinction. Over 70% of all land species on earth, became extinct. The reason for this event has become clear and concise. Our world’s land masses slammed together into what is known as our ancestral supercontinent named Pangea. The air was rendered poisonous and the land became so vast and arid lacking water and food to sustain life. At this point in time the Appalachians were higher than the present day Himalayas and the winds were much stronger and more sustained than they are anywhere today. Actually the land was so dry and winds so fierce that sediment blew from the Appalachians all the way to an area that occupies to this day Southern Utah, Southwest Colorado, Northern Arizona and North West New Mexico. This sandy sediment mounted up into sky scraper high sand dunes that looked much like today’s Sahara. But this is not where the story starts. The a fore mentioned Dunes lay on top of a series of sediments that occurred before the land became this extreme. To the East of this four state region there was a series of mountains that are now referred to as the Ancestral Rocky Mountains. During times of wetter climate conditions, large deluges of precipitation plundered the ancestral Rockies spilling from it blood red sediment that fanned out into the landscape west of the mountains. Also sewn into this story are a series of low lying seas which ebbed and flowed  into the historical land layer cake.  This epic tale happened not once but multiple times stacking layer upon layer of variations in rock: sand stone, shale, limestone, more stand stone, lime stone, sand stone, more shale, leaving visible to the naked eye different versions of the landscape.  The story of history of this region disappeared deeper and deeper underground giving the impression it would be gone forever.

After almost 200 million years of this North America was now separated from the rest of the super continent and something completely different started to happen.  As North America drifted westward the ocean floor of the ancient Pacific became over run and pushed under North America.  The Ocean floor, or plate, was pushed under North American at an unusually low angle.  This caused mountains to rise as much as 1,000 miles to the east.  The huge swath of land from our story that occupies significant parts of present day Utah Colorado, Arizona and New Mexico received an enormous amount of pressure from below ground to rise like the Rocky mountains to the east.  Some areas did succumb to this tension and a high mountain was pushed up here or there, land cracked, land folded but the majority of this land did not fold, for the most part it stayed together and was uplifted to one cohesive high country which is now called the Colorado Plateau.  Now that this land was elevated with the high Rocky Mountains to the east and the North it was ready to be carved by one last awesome force of Nature:  H2O

Today, if you stand at the southern edge of this geologic province you would be looking down a fortress of several thousand foot sandstone and limestone walls that stretch across the entire state of Arizona. These walls reach their climax smack in the middle of the state. Standing here looking down you feel that you are at the edge of the world peering into an alternate reality or dimension, down into the land that has given birth to the New Age, the age of AQUARIUS.

Sedona has become and still is our worldwide capital for communing with the Metaphysical universe. Bits and pieces of spiritual disciplines and religious practices such as Hinduism, Suffism, Yoga and Native American ceremony since as early as the 1950s have slowly been stirred into this small community, allowing it to become a harbor for what is most commonly known as this New Age Spirituality. Along with it came the psychics, the fortune tellers, crystals and the pictures of Auras and a general obsession with the color purple…… By 1980 a self proclaimed psychic with a following named Page Bryant announced that there were sources of positive, negative or neutrally charged energy conveniently spread throughout the Red Rock country of Sedona within close proximity to the road. These were the vortexes or vortices. Belief as well as inspiration from these Vortexes has spread since Page made the designation and today Sedona, a town of just over 10,000 year round residents receives towards 4 million tourists a year. A study conducted by NAU (Northern Arizona University) found that close to 70% of these visitors are here for the vortexes, or “healing properties” of Sedona.

I have no idea how our family would fit into this statistic. Not a believer in Page’s vortexes there is no doubt some incredible energy found in Sedona…or rather in the Red Rock Country that surrounds Sedona. In my personal experience I have found large amounts of positively charged energy on some of the spectacularly exposed climbs and summits of the dozens of steep spires that make up the Red Rock country. Most of the climbs on rock so red you sometimes feel you are climbing the flesh of the earth. To think about climbing up rocks laid down during events that occurred 300 million years ago is certainly sublime. Also need mentioning almost all of Sedona classics have the 15-25 foot high limestone “band” or layer creating an important defining feature of every climb. Deposited by a shallow sea during these ancient times, this band of very different rock always gives a climb a vortex of one sort or another. Dr. Rubo’s Wild ride is still my favorite with multiple pitches of aesthetic hand cracks, interrupted only by a very strenuous and steep lime stone section, followed by exposed pitches of face climbing on more red wine colored stone. All climbs seem to end at a classic Sedona spire summit. I want to carry a level with me at some point to the top of all the Sedona towers. I bet every one has square, level rock summits. During our stay we also had the great opportunity to climb Queen Victoria Spire right above Sedona. The Lime stone band gave us an undercut off-width crack that was a real bear. And then there was Goliath…with more great cracks, wild exposure, positive vortexes. 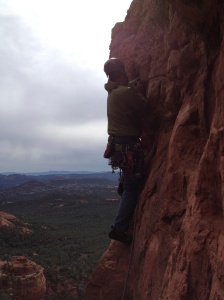 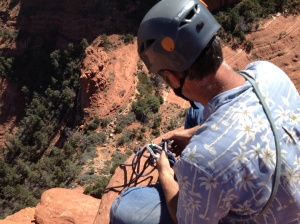 Walking around downtown Sedona I can’t help to feel that with the overwhelming number of tourists, candy shops, pink jeep tours, fudge shops,  souvineer traps etc. it is surely one big negatively charged vortex. It was however easy to ignore while we were there, we remained surrounded by friends and family.  Roni and Michael came to be with us while we all stayed at a beautiful hotel removed from down town. Tim joined us with a last hike before he left to Durango and Scott came down from Flagstaff to hike and show us around. Most trails take you to wild, sky high locations with views that give insight to timelessness and vastness. Surrounded by all of this natural, family and friendly goodness the thought of staying here and spending several decades past through our minds more than once. But the thought never stayed for long enough and eventually the time came to move on. From there we moved up onto the top of the Mogollon Rim to our friends Scott and Lindsay Flagstaff, Arizona. 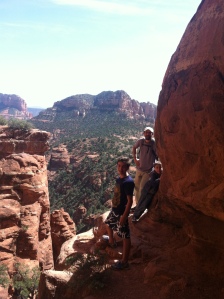 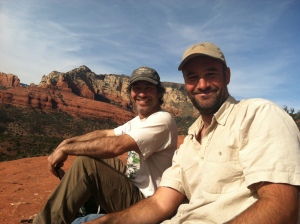 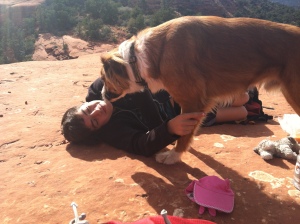 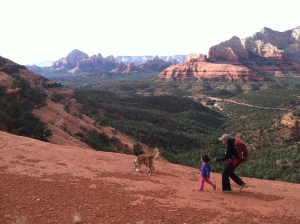