Posted on July 28, 2014 by josephandmichelle

“It was my good fortune to know John Muir. He had written me, even before I met him personally, expressing his regret that when Emerson came to see the Yosemite, his (Emerson’s) friends would not allow him to accept John Muir’s invitation to spend two or three days camping with him, so as to see the giant grandeur of the place under surroundings more congenial than those of a hotel piazza or a seat on a coach. I had answered him that if ever I got in his neighborhood I should claim from him the treatment that he had wished to accord Emerson. Later, when as President I visited the Yosemite, John Muir fulfilled the promise he had at that time made to me. He met me with a couple of pack mules, as well as with riding mules for himself and myself, and a first-class packer and cook, and I spent a delightful three days and two nights with him.”

So it was in May 1903 that at a time when Yosemite Valley was overrun with saw mills, sheep herding, saloons, brothels and filth there was one influential man who saw it for what it was, one of the world’s greatest mountain temples. John Muir successfully convinced the president that Yosemite Valley must be protected by the United States. This Three day horse packing trip that Roosevelt was talking about is still considered the most important camping trip in the history of conservation.

Now in May of 2014 Michelle brought Jacob and Elias to see a play in Yosemite Valley, The Tramp and the Roughrider, where this was to be re-enacted and celebrated. Jacob described the premise of the play; “It’s the last evening of the camping trip that Roosevelt and Muir went on together. They had to actually get away from all of the commissioners that currently ran the Valley. They were making great profits from the saloons and businesses and you could tell that t they didn’t want the status of the Valley to change. Most of the time Roosevelt told stories of his personal adventures but you could tell John Muir was working really hard to get the conversation back to the Valley. As the end of their last camping evening approached, John Muir pressed Roosevelt reminding him that they needed to discuss the transfer of the Valley from California to the national government. Finally Muir got Roosevelt to promise to add the valley to the National Park system and they ended the play. I was able to get a great feel for both John Muir and Roosevelt as the actors did a great job portraying them. “

While Michelle had a date with the boys, I had a date with Ila. We took a short walk up to the base of the most awesome wall of rock in the United States, El Capitan. We laid down on our backs, with our hands behind our heads and gazed up. Then Ila began, “What’s that daddy, what’s that?”

“Oh” pause….”but what’s that daddy, what’s that?” Ila continued pointing up at the seemingly endless swath of perfect granite.

This continued back and forth for a bit and finally I struck a deal. “I tell you what Ila. In 12 years you and I will climb that together…..OK?” 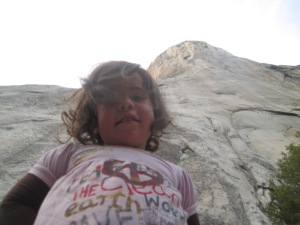 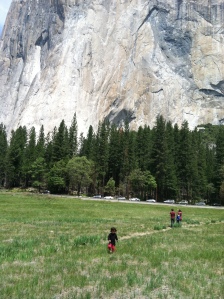 This promise was based on the fact that the day before I had taken my fast growing, double hamburger eating 12 year old son up Half Dome’s Snake Dike. Nothing quite so big and mighty as El Cap but with 18 miles round trip, 5,000 feet of elevation gain and loss and a total of 800 feet of rock climbing, I saw that in just two more years El Capitan as a reasonable goal for any well adapted 14 year old. 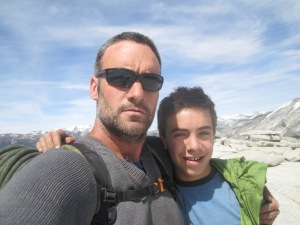 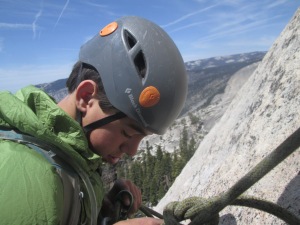 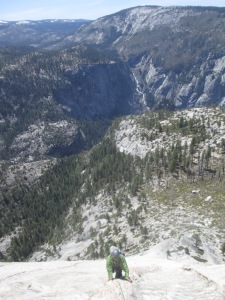 In November of 1958 a man named Warren Harding after a year and half of effort topped out on The Nose of El Capitan and made history. Not only was he and his two other comrades Wayne Merry and George Whitmore the first people to ever climb the “unclimbable” wall and not only did the efforts that lead to this monumental climb concoct a stream of innovation in climbing equipment to a level never seen before, but Warren Harding transcended the ages when at the top of the climb a reporter asked, “What does it feel like to have conquered El Capitan?” and Warren responds, “Well, it seems to me that El Capitan is in a lot better shape than I am right now”. With that one comment the culture and stigma around climbing shifted to the timeless fact that the mountain shapes us. And what better place to be forged than on the strikingly beautiful walls of Yosemite Valley?

I have always been careful not to push this stuff on the kids. It’s important that they want to climb in their own right to insure the level of motivation that’s required for such huge climbs. It was in this sentiment that Elias was instantly motivated to go climbing with dad when he watched Jacob soaking in his post mountain adventure high, actually it would have been cruel and unusual punishment not to take him climbing. As promised, Elias and I went to climb several three pitch climbs on the beautiful apron of rock below Glacier point. 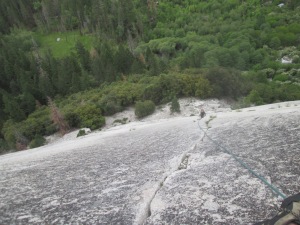 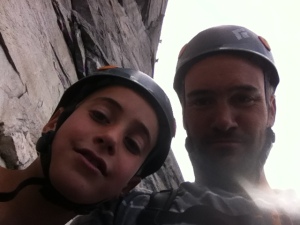 In 1993 our society once again received enlightenment from El Capitan when Lynne Hill “free climbed” the entire route. She was not the first woman to free climb The Nose of El Cap rather she was the first person to free climb the Nose of El Capitan. That feat was on par to Martin Luther King’s “I have a dream” speech. To climb El Cap with my daughter at any age would be a dream come true…If she wants to.

When Ila and I were done with our date we went to the theater to meet Michelle and the boys and eat ice cream. Sticky ice cream drenched her hands and face when we greeted the gang as they walked out of the theater beaming with smiles. “That was the coolest play I’ve ever seen.” Jacob said in a daze.

Teaching our kids about these great characters and their role in protecting our dignity and land is important to us. We had no idea it would be this easy for them to understand. Really all we needed to do was show up. Just like singer, song writer Greg Brown says: