Posted on June 14, 2014 by josephandmichelle

As we drive out of Colorado into Utah we turn North onto Utah state highway 191. Down, down, down we go back into the layers of the Colorado Plateau. We turn left onto highway 211 towards Canyonlands National Park. The road continues to descend into older sandstone layer bringing us into the tight curves that take us into Indian Creek, a creek that cuts its way through the awesome Windgate sandstone. We wind down the road and my eyes are stuck looking up at the walls. One, two hundred foot uninterrupted, red beautiful walls, “watch, the road!” Michelle bursts forth. “OK, I’ll try. but….” The road winds, the canyon widens, the walls get taller. I try and keep my eye on the road. New canyons join Indian Creek and our canyon widens and the walls stand ever so awesomely until they turn to the North and South and we are sailing into a wide open plain looking at an otherworldly landscape. Bizarre red and white rock pinnacles and spires own the horizon. Rock is everywhere. 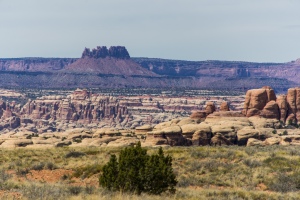 My friend William, a former college roommate, recently became a Park Ranger at Canyonlands National Park. Impeccable timing. Within moments of arriving at his house Jacob, Elias and I squeeze into his tiny Suzuki Samurai 4×4 with Will at the wheel and sputter down a dirt road leading into a maze of rock. We arrive at a parking lot to what looks like a trailhead. At the trailhead Will puts his machine into four low and up this steep trail we go. All I see in front of me is steep rock before the hood of the car pops up and shares the view with blue sky. As the car rocks like nobody’s business I make sure the boys are well buckled and holding on. “Maybe they should have helmets” I think to myself. We stop at what seems to be a dead end and commence a four-point turn in order to continue heading up the switch back that keeps climbing the hill. We’re all giggling like kids and for a brief moment I remember the crazed feeling of glee that visits an eight year old on a regular basis.

Back at Wills apartment, nestled most appropriately in rocks, we shower, eat, drink and most importantly plan. Will is a lover of maps. On detailed maps laid out over the kitchen table he points out some areas he’s been exploring deep within a forgotten maze of canyons. He highlights a hidden valley where people are not permitted to enter. It’s one of the only valleys in the area where cattle have never grazed and is strictly off limits. Then he points to a camp he’s reserved for our next adventure out in the middle of a dense maze of canyons for the next three nights.

The following morning we pack up 4 days worth of stuff, water and people into the back of his 4×4 pick up truck. Somehow we all jammed into the cab, Michelle, Elias, Jacob, Ila in the seats behind with me sitting shotgun and of course Will at the wheel. “Can this truck drive those crazy roads?” I enquire with some doubt. “It’ll be tricky but we’ll take it slower than with the Samurai” he answers.
The first hill, the one that we had driven the evening before is called Elephant Hill. It has a national reputation as a hell of 4×4 track and it’s the first named feature that we tackled to get out to our destination. The giddy fanaticism that I had possessed the day before was soon replaced by puckered hope. Jacob, Elias and Will were happy as ever – Michelle and Ila got out and walked when things became questionable. Questionable is a mild term for the road that we traveled… 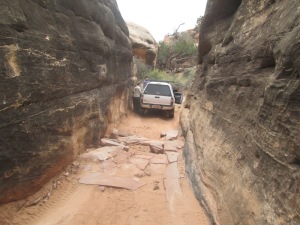 From the northern end of the mighty Wind River Mountains in Wyoming, Glaciers give birth to an important river called the Green River. From there the Green can only flow southward picking up more water along the way. The Gros Ventre Mountains and the Wyoming mountains contribute generous amounts of water before the Green makes its way across the border where it receives ample amounts of water from both sides of the Uintah Mountains, the highest peaks of Utah. It then continues flowing down onto the Colorado Plateau where it begins cutting deep canyons in the Sandstone. Finally after 730 miles it merges with and becomes the Colorado where it then continues downstream to carve the Grand Canyon before being put to work hydrating 30 million Americans throughout Arizona, Nevada and California. 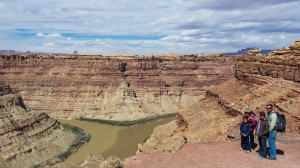 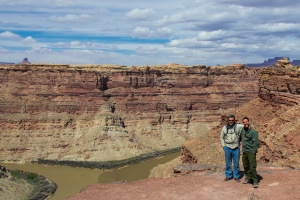 The Colorado River itself headwaters from the highest of the Rocky Mountains which is fed via water sheds along the entire length of the continental divide through the state of Colorado from its Northern border with Wyoming and its southern border  with New Mexico. The journey these rivers take before merging meanders through some of the wildest and most pristine land in the United States. Where the Green and the Colorado rivers meet is at the geographical and spiritual heart of what could be argued as THE wildest place in the United States: The Canyonlands.

This central region of the Colorado Plateau is quite literally a maze of canyons so much so that one of the zones of Canyonlands National Park is called The Maze and is considered one of the most remote and inaccessible places in the country. Something that adds to this maze like structure is that not only are canyons created because of classic water erosion but these layers were cracked and separated with the Colorado plateau uplift. The end products are “canyons” that lack a down-hill or an up-hill or even water flow. They are just corridors of sheer rock that may meet up with another corridor or may dead end. When visiting the Canyonlands it is clear that they have their own set of rules and you had better be careful if you want to make it back out.

When the six of us pulled into our back country camp we were delighted. The entrance to the camp was through almost a tunnel like corridor into a large chamber flanked on four sides by sandstone and overhanging rock above. Within the first hour the boys found petroglyphs etched into the rock that probably dated several thousand years. We spent the next few days hiking and exploring the canyons, the needles, the wind and the quiet. There seemed to be a petroglyph, pictograph or crazy rock formation around every corner. On the third day we received a forecast that it was going to snow over night – time to leave so we wouldn’t be stuck. The following morning at Will’s place we woke up to snow on the ground as we enjoyed mellow morning turning our attention to the next adventure in this area, rock climbing at Indian Creek. 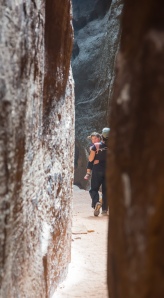 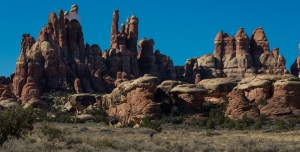 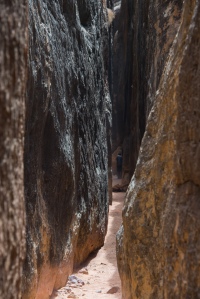 Indian Creek is home to the worlds best crack climbing. It’s most famous for the consistency in crack width. That width may vary less than a half inch as it shoots up a smooth vertical cliff for over 100 feet. To climb it you need to put your fingers, hand, fist or arm into the crack as well as jam your feet. Then you pull, step up and do it again. Jam, pull, jam, jam, pull, jam, over and over… It’s a hell of a work out. It sounds tedious perhaps but it’s so much fun. We spent a few days focusing on this area which is only enough time to begin getting accustomed to this type of climbing. In my opinion every day climbing at Indian Creek is a good day. In the end nursing scrapes and scratches on hands and arms it was clear I had not turned Michelle and Elias into lovers of crack climbing, but when talking to Will about coming down for a week next fall Jacob in an insisting tone said “I wanna’ go with you dad. Can I go? Can I?” Ah ha mission complete… 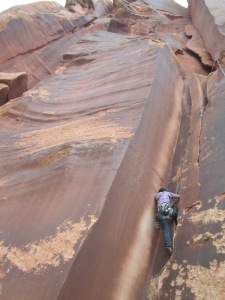 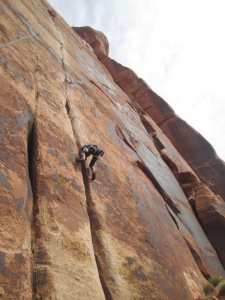 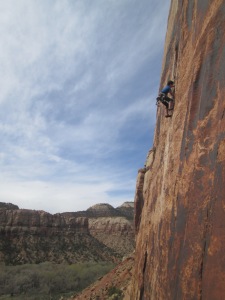 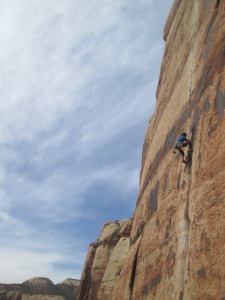 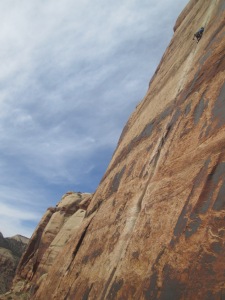 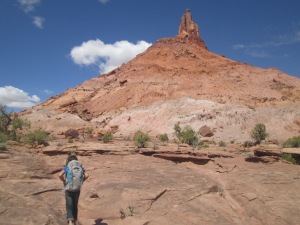 Evenings were always fun with lots of wine, good food and peppers, lots of peppers. Will even took out the accordion at times. Our bodies felt healthy and vital and our minds were rested with the silence that comes with the land here and although we had not reached our fill, it was time to move on. 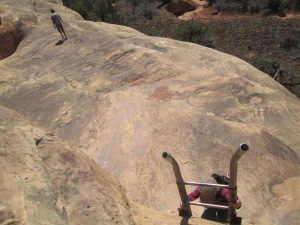 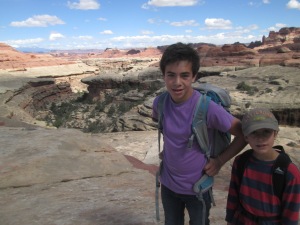