Posted on February 6, 2014 by josephandmichelle

Beaumont, a city in East Texas, close to the boarder of Louisiana is among the wetter cities in our country.  With an average annual precip of close to 70 inches a year and surrounded by lake and bayou country, it is amazing that it shares a state with El Paso.  El Paso, one of the driest cities in the country receives on average 9 inches of rain a year.  What happens in the 830 miles between these two cities is the product of this fairly abrupt transition in climates:  Severe thunderstorms with dangerously big hail and a high frequency of tornadoes.  In fact the highest number of tornadoes of any region in the country is found in Texas.  So it really should come as no surprise that when a mountain range is pushed up in the western part of this meteorological shear zone there is a high likelihood of wind, especially on the leeward side of a range where the dry winter air mass sinks and descends rapidly back down the mountain range to the other side, pulled eastward towards the humid Gulf air.  It was such a mountain that we were headed to.

On January 2nd we drove southwest across the border into Texas and about 45 minutes away to the Guadalupe Mountains National Park.  The mountains that make up this park were visible the whole time we were at the Whites campground.  It looked like an abrupt mountain range flanked by what seemed to be almost thousand foot tall lime stone cliffs.  We set up our camp nestled at about 5,500 feet elevation at a very cool campground at the mouth of one of the ranges intriguing valleys.  Once camp was set we were off to hike up and into the mountains.

Everyone was quite pleased to be walking.  Having spent a bit of time in the flattest landscapes of our country the towering walls that guarded the valley while we were hiking up was like medicine.  Jacob remarked that he enjoyed the hiking because it gave him time to think. Funny because we were in the car for days but it is the movement of our bodies, coupled with the openness that seems to let the thinking happen. 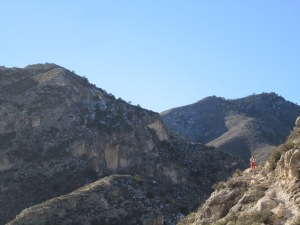 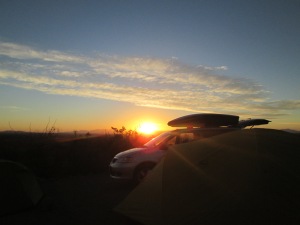 There are the flat dreadfully barren expanses of landscape that appear in perhaps everyone’s subconscious when the word desert is used and then there is what happens to the desert when the landscape is not flat.  This desert mountain range acts like an expert water catcher and the strange and interesting plants that are able to make the most efficient use of this water are the norm here.  The mountain range acts like a sponge mostly because any moisture that does sneak into this area is pushed upwards by the landscape into to higher and thinner air until the air can’t hold that water anymore and it condenses.  Even though the Guadalupe’s are essentially in the middle of the Chihuahuan Desert the highest elevations are completely forested.  Much of the high country is sloped northward which keeps the sun from beating down on it just that much more.  We didn’t make it that high on our hike though.  We made it up into the upper Chihuahuan life zones where plants were abundant and especially those designed to catch any water that fell.  Yuccas and cactus were all over. As we hiked higher we began reaching Junipers and Madrones which were cool to see because they are all over the place on the coast of Western Washington.  But there the Madrones are always on some south facing hill right on the coast poised to get the sunniest driest places in Western Washington.  Here they’re seeking out shade, small drainage bottoms, sort of showing a sign that more moisture is present here and not less. 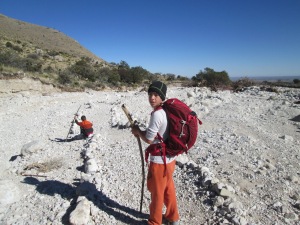 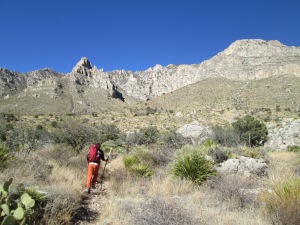 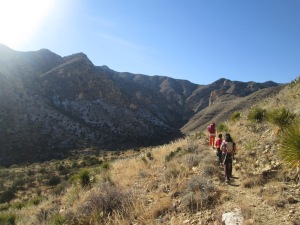 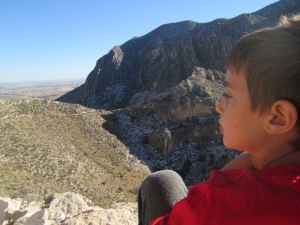 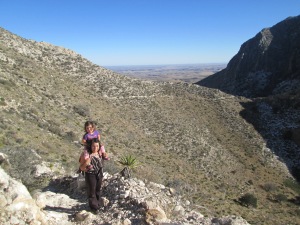 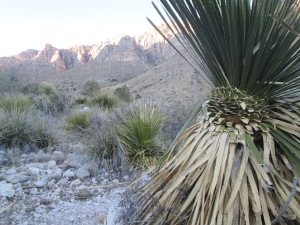 The following day we were reminded that we had gotten lucky, our hike had been warm and there was no wind at all.  That morning was very windy and cold. I made coffee and oatmeal on the little whisper light stove on the ground near some rocks instead of using our double burner Coleman stove on the comfortably arranged table. The kids and Michelle snuggled in the tent as long as they could before they needed to emerge into the wind blasts. We had to hold onto Ila! As we were packing up the wind grabbed the top of the roof rack out of my hand and flung it back aggressively.  Crack! The roof rack split and I yelled some colorful language.  That was when everyone knew I was not happy because we are one of those old school families that don’t cuss.  Somehow I put it back together and we got out of there.  Well, that was the expected norm there… wind.

We didn’t end up stopping at Hueco Tanks State Park like we had planned.  I have heard about this famous bouldering area for years and we made reservations to camp there.  When I got there I felt like it was just all wrong.  It was like if you were really craving vanilla ice cream, perhaps this has never happened to you, but you just want vanilla ice cream.  When it comes out it wasn’t ice cream at all it was like one of those weird Indian deserts…..sweet meats.  Ever try sweet meats?  Terrible.  If they bring out chocolate ice cream than it’s like, OK, that sucks, but I’ll eat it any way.  But no chocolate, it was like Indian sweet meats.  I hate that stuff.  I wanted my vanilla ice cream! Well, not only were you suppose to have reservations for camping, we were suppose to have reservations for bouldering and we were suppose to have a guide….for bouldering!  Just like I have never understood why I would ever want to eat sweet meats we weren’t even close to understanding why we would want to stay and deal with how convoluted and not relaxing the whole thing felt….so we left.

We drove on, almost directly North to a spectacular state Park called Oliver Lee State Park, which was nestled at the base of the San Andreas Mountains across the valley from the famous White Sand Dunes in New Mexico.  Here we had arrived exactly where we wanted to be and we never knew we wanted to be there.  We loved Oliver Lee State Park, we stayed there the next day and night and hiked up the fossil filled limestone canyon.  It was just us, it was great, it was better than ice cream. 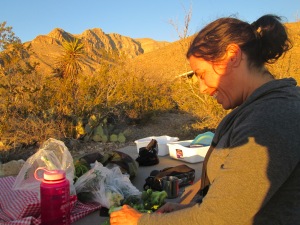 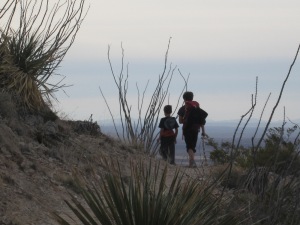 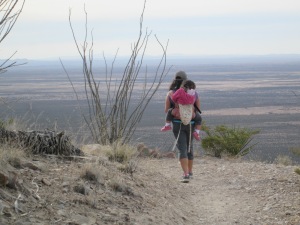 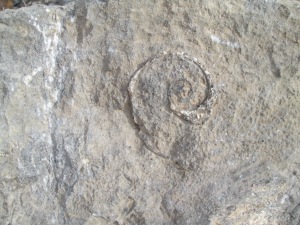 On January 5th we got up on another chilly morning and went to the largest expanse of white sand dunes on earth.  Two hundred and seventy some odd expansive square miles of desert are all made of grains of white gypsum that comes from several thousand feet higher in the mountain range directly west of the dunes.  It’s a case of the right geology and the right dry and windy climate that come together to create this very cool place.  Fortunately much of it is protected within a national monument because an enormous amount of the land between these two desert mountain ranges belongs to the US Airforce, warnings of missile testing north and south of the Monument is everywhere.

The Dunes were a sublime experience and Elias wrote about them in his Main Lesson book:

“White Sands was huge.  We went to White Sands, N.M.  It was totally not what I expected.  I thought there would be little mounds of sand, but there were huge sand dunes.  The dunes were very soft, cold, and about 60 to 100 feet tall.  When we left New Mexico we went to Arizona but that’s just another story.” 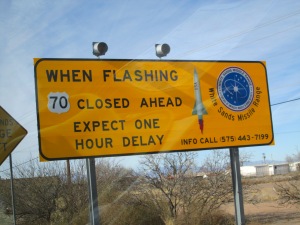 After the sand dunes and many days of literally freezing mornings, I promised everyone we were headed to warmer places.  We kept lucking out with a warm day here and there in this windy desert but the weather was about to get quite a bit colder.  The last mission in Chihuahuan Desert was to go find an authentic Mexican restaurant in Las Cruces.  On the drive in we settled on a brew pub that looked like it would take care of business.  When we shuffled in to find our seats all of the locals were starring hard especially as Michelle attempted to nurse Ila.  Most of them looked like they had never smiled in their lives.  No way.  I got everyone up and even though everyone was getting hungry and cranky we piled back in the car and resorted back to plan A:  authentic Mexican.  Since it was Sunday in Las Cruces it took awhile but we found it and it was sooooo good – the real deal.   Back in the car and off seeking the sun.