Posted on December 8, 2013 by josephandmichelle

They said it couldn’t be done (or shouldn’t) however we left WI around noon, drove through the UP, onto the Mackinac bridge over Lakes Michigan and Huron by sunset and continued on to reach NY by 1:00pm the next day. For the record, Lake Superior is very long. It went on forever and was a beautiful companion for that part of the drive.  The kids slept through the night which made the longest driving leg of the journey bearable. I felt like Joseph and I were in our early 20’s again traveling across the country from AZ and Colorado to the East Coast – were we actually that care free?  My gosh, that was almost 20 years ago. Thanks to Pandora – Greg Brown, John Prine and Bob Dylan we stayed awake…well Joseph stayed awake and I woke up every little bit to make sure.

I think I have driven maybe 4 hours on our trip to date (while en route). I mostly navigate, write, daydream, return business related emails, brainstorm, sing and make food for the family. This said, with the sun rising, I took the 6:00 am shift through rural Pennsylvania on the lookout for coffee and a good place for a sleepy family to have breakfast.

Awake, caffeinated and fed from the kid’s first experience at a classic greasy spoon diner we drove the last few hours through Pennsylvania, New Jersey and into one of the craziest spider web of Interstate mayhem, on planet earth.  Onward to Long Beach on the south shore of Long Island to visit my brother and his family in preparation for Zac, my 13 yr. old nephews Bar Mitzvah.

Jack’s house is 2 blocks from the newly restored Long Beach boardwalk which was destroyed during Hurricane Sandy. I can smell the ocean from his driveway and it beckoned. We parked the car, hugged my brother who was off on a thousand pre Bar Mitzvah errands and walked to the beach via the farmers market to buy fresh sour pickles. We officially entered my childhood stomping grounds and the reverie came flooding back. I had an itinerary for the family for the week including LI and NYC aching to show them where I grew up, places so different from the town and area that we have chosen to raise our family.

As we walked onto the beach Ila immediately stripped down to her suit laying on the powder soft sand rolling and rolling down towards the water…the antidote to being strapped into the car seat for 24 hours. The boys (all 3) dove into the ocean. The Atlantic is so different from the wild cold Pacific, crashing waves and vast but somehow more tame. It is the smell and imprint of this ocean that led us to again live by the Ocean on the west coast. I can’t be far from the sea…

Over the next few days the family started rolling in from the East Coast, aunt’s, grandparents, cousins coupled with bagels and more bagels. Friday night dressed in “handsome clothes” as a young Jacob once dubbed them, we piled into the minivan and headed off to Temple Avodah as Zac grown up, self assured and handsome led the congregation through a Sukkot inspired service. The little girls (Ila and and her cousin) danced around the edge of the congregation in my high heels while the ancient prayers soaked into their cells. Saturday Zac was called to the Torah for his official Bar Mitzvah, such a proud moment for our family, feeling the presence of my dad and of our ancestors in the room as the Rabbi reminded Zac to make wise choices in his life even though those are the choices that take effort and may not be the easiest. Celebrations followed lasting through the weekend. 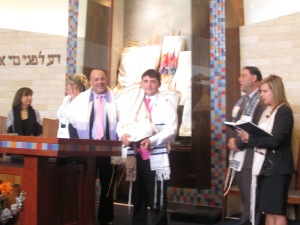 The socializing and celebrating lasted for a couple of days.  While many of the relatives traveled back to their homes by Monday morning we rallied our little family onto the LIRR, (the Long Island Railroad) first stop Penn Station, NYC. What to do in NYC if you only have one day with a 11, 7 and 1 yr old? We planned a busy itinerary that quickly changed tracks.  Of all of the kids Elias was affected the most by the density of souls pouring out onto 7th Ave.  As we walked through Times Square heads craning to see advertisements, people, marquess more people, and Jacob trying to edit what the little ones glance at,  Elias, our country boy, clutching me tightly asked to go back to LI, saying somewhat distressed, “I was excited but this isn’t what I thought it would be…”.  Understanding that we needed to find the most natural place in NYC as a transition from suburban to urban, we popped down into the subway and minutes later popped up into Central Park. Ahhh, he started to breath calmly again. 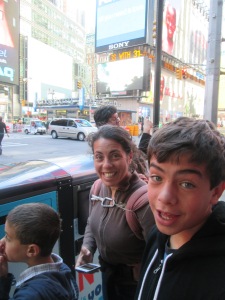 I found out 2 things on this part of the excursion (1) never would I have guessed that so many turtles live in the pond in Central Park and I am pretty sure we needed to stop and greet each one in our rented row boat and (2) Joseph is officially a land lover although he captained our boat with dignity, he is more comfortable on the Earth. 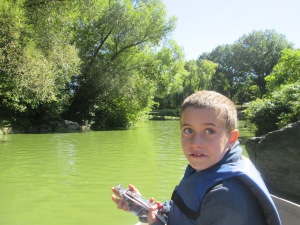 The quintessential outing was lovely and gave the kids a unique experience of the City before we popped back into the subway and out into Chinatown for some Dim Sum. Chinatown is its own country in NYC. The entrance from the subway up onto the crowded city street was shocking in a subtle way teeming with people working in tiny basement shops dappled with shops hanging whole pigs, chickens exotic vegetables and fruit. The restaurant was exclusively for locals, 3 floors up in an unmarked building recommended by a friend. Nobody spoke English and although I think my distressed request for “no pork” made sense, I crossed my fingers and bit in to the delicious dim sum rolled to our table on carts overflowing with options.

As we wondered through the Chinatown heading to the financial district we stepped back in time in the little park a few blocks away. Surrounded by the ruins of what looked like an ancient Asian inspired temple old wrinkled Chinese woman played Mah Jong, old men played GO on the picnic tables with music from the traditional musicians all around. The scene felt centuries old. We could have stayed and watched for hours if it weren’t for the rats running amidst the people. I kid you not! In the middle of the day, rats were scurrying into holes all over the park and the park patrons paid no mind. This is what the boys still talk about of all of the things in NYC! 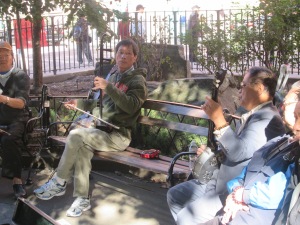 Our visit wound down as we approached the area of 9-11 at rush-hour now with people scurrying all over.  The monument being constructed in memory of the deceased is still in process and the new tower beside the former Twin Towers is almost complete. The scene as well as the day providing for some rich conversation on the subway and train back to LI as 2 sleepy boys, one sleeping girl and their parents soaked up the sights of the urban jungle.