Natural Building in the Four Corners by Jacob Anderson

After driving through the night we came to daddy’s friend Andrew’s house. It was really late and we drove for a long time down a driveway. We went inside and went to sleep. We stayed at his house for three days but he was not there. When he came in on the third night he told daddy “you have a plethora of Piñatas” in referring to us kids. He was really funny and entertaining.

Andrew lives in Dolores, CO in the middle of nowhere on 6 acres of ponderosa forest in a 2 story straw bale house. The outside walls of the house are plastered to look like waves and you could see the grains of straw in the coating. We got to stay with Andrew for about 2 weeks in early spring. In between great waffles and super fun stories, I asked him why he started working with natural building materials; he told me that when he used to work with conventional materials he would come home sick. He said this happens to other builders as well and is called “sick building syndrome.” When he started working with natural materials instead he felt great. Therefore he learned the art of straw bale building and started “Natural Dwelling” his building company. Andrew invited us to visit a house that he was building on the border of Utah and Colorado, this time in the ABSOLUTE middle of nowhere. The funny thing was the homeowners just moved from Bellingham.

It was neat to see the stages of building a straw bale house. The exterior walls were unfinished when we pulled up to the house and you could see the straw bales under the 1st layer of earth plaster that is referred to as “mud”. Andrew was waiting for warmer weather to finish these walls. The inside on the other hand was just about finished being mudded and although it was freezing outside the inside was toasty warm. I learned a bunch about earth building during our time we stayed with Andrew. Here is an overview.

Many straw bale homes have a concrete foundation with radiant heat inside the cement. To build the radiant heat system you lay down a metal grid and on top of that lay the pipes that will hold the water. Attach the pipes with plastic ties and then pour the concrete. When the concrete dries the pipes are set and the hot water flows through the pipes. This heats the floor and the heat rises to heat the house.

Straw bales are used to form the walls. First you make a frame out of wood and then place straw bales within the frame creating thick insulating walls. It is the combination of this insulation, a south facing house design and the radiant heat that keeps the house at a pretty consistent temperature, cool in the summer and warm in the winter. I noticed that in both Andrew’s house and in the house that he was building all of the wall edges, doors and window frames where curved and quite thick. It is important to note that they use straw bales not hay bales because hay has seeds which (1) can germinate and (2) attract rodents. In Andrew’s case he is able to speak to the farmer before he buys the straw bales to make sure that the straw isn’t moldy, didn’t have seeds and that the bales were a consistent predetermined size. When designing the straw bale home it is helpful to build the roofs overhanging with the ability for water catchment. You would want to build the roof with metal materials so the water is safe to use.

Earth Plaster is made from a mix of sand, straw pigment and water. Together it makes a great plaster for drier climates although it withstands the snow. The pigments that I saw were made from crushed minerals and different types and colors of clay. There are also synthetic pigments used for less natural colors. The plaster is then “coated” onto the interior and exterior walls at a consistent thickness and left to dry. When I attempted to coat a wall at a consistent thickness, I failed in utter misery. One needs to eat much spinach and have years of experience to master the art. It’s all in the Popeye arm strength! 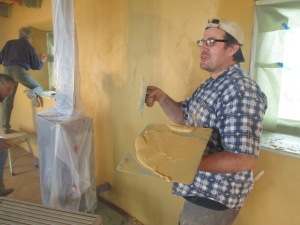 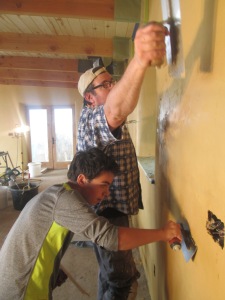 Although these were modern homes, Andrew was not the first person to build with straw in the four corners region. It turns out that the Ancient Ancestral Peubloans built their homes called Pueblos out of straw, mud and stones in the same region as Andrew’s houses starting as early as 1,200 BC. When we went to visit Crow Canyon Archeological Center and were given a tour by the awesome Shawn Collins we visited th Center’s replica Pueblo and learned about the Ancient Peoples culture and lives. She explained that before this completed Ancient Publoan replica visitors would ask, “Why did they live in these ruins instead of a finished structure.” Although this may seem obvious to many of us, the special thing about the replica is that nobody ever gets the opportunity to see what an actual completed ancient Puebloan structure looks like, or make the mistake that they lived in it looking like it does today…in a state of ruin. All of the thousands of structures that remain in the four corners region are only preserved ruins of the past. I noticed that the windows of the short thick walled Pueblo structure were facing south and the doors were roughly 4 ½ feet tall. The attached rooms that were used for living, weaving, sleeping and grinding corn were cool inside even on a mild day. I imagine on a hot day the Puebloans would feel comfortable. 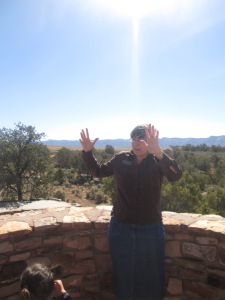 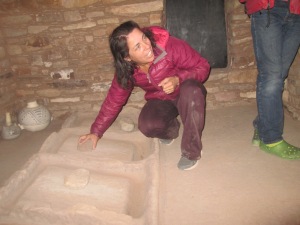 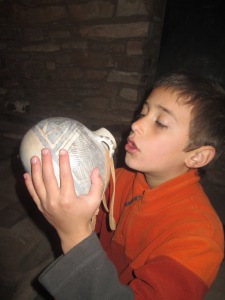 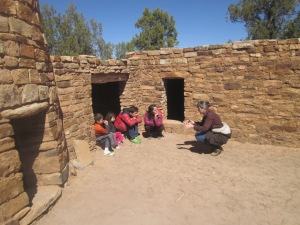 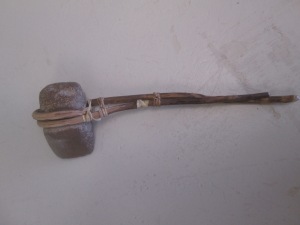 A few days later mom and dad took us to a National Park called Mesa Verde. Mesa Verde is the most intact and largest ancient Puebloan group of villages and they put their villages in cliffs. We walked down a paved trail to the bottom of a canyon to where the most intact cliff dwellings were located. You could walk right up to the walls, you could see the living areas. You could go into this hole in the ground called a Kiva by a wooden ladder into a round room with log ceilings. On the way out we saw this maze that was not a cliff dwelling. It turned out it was another shrine to some god but people lived in it. From a distance we could see many more cliff dwellings. The biggest one could fit 150 people. Another interesting thing is that back when the Ancient Peubloans lived here over 30,000 people lived in the 4 corners regions where nowadays only 25,000 people live in this region. 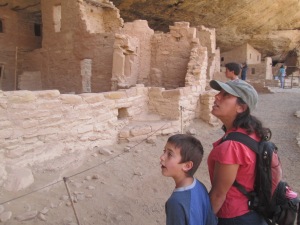 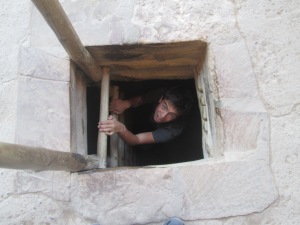 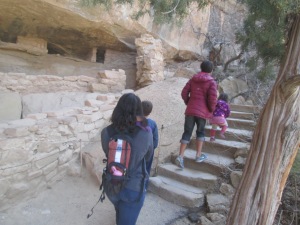 It is a good thing to note that even though we have all of these modern building more and more people are using older and more traditional ways of building that have obviously worked well for thousands of years, like straw bale because the materials are healthier and better for the environment.

I hope you’ve enjoyed this unabridged version of Natural Building by Jacob S. Anderson narrated by you, the reader, and brought to you by 5andaRoofRack.com Thank you.