Posted on February 5, 2014 by josephandmichelle

We promised Elias that we would take him to visit a cave for his birthday.  When we made that promise we had no idea how easy it would be to keep and that we would be able to visit two cave systems instead of just one.  The morning of the 28th of December we drove into swampy east Texas and onward, through humid Houston, the 4th largest city in the country and onward into rolling Texas ranch country watching the deciduous forests slowly widen and prickly pear start appearing.  We drove into San Antonio where we stopped for groceries; here the forests were made up of 15 – 20 foot tall Pinion Pine, Gambles Oak, Juniper, and some sort of short Cedar.

During the drive Michelle found a wonderful camp ground only 40 minutes beyond San Antonio called Cascade Caverns Campground.  When we arrived we stepped out of the car, set up our tents and quickly signed up for 2 nights instead of one. The kids tramped out of the car after 2 days of driving and quick as a wink geared up with bow and arrows, backpacks, pocket knives and trowel heading like the lost boys (and lost girl) of Neverland into the woods for adventure. 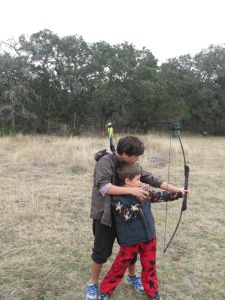 It turns out that just beyond San Antonio there lies the remains of ancient reef systems.  The sea receded leaving the limestone remains of what’s called the Texas Hill Country.  These hills harbor a very high concentration of caverns.  One such cavern was located right under our tent at the campground that we decided to call home for the next several nights.  We signed up for a tour the next morning which Jacob has taken the time to explain here:

Elias, Dad and I walked to the meeting place.  There were about 10 people.  The guide came and we all started to walk.  The guide started to tell us about the caves and this is what he told us:  “The caves were created by water 140 million years ago.  All of the land was under water and the silt and dead life was made into limestone.  Limestone has a slow dissolving point in water.  When the water receded and the land was uplifted, all of the rain water went to the lowest point.  So when that water sat on the stone it started to dissolve creating the caves.”

Also because of the very wet nature of this cave there are two animals that live here, Bats and the Cascade Caverns Salamander which is endemic to this particular cave system. 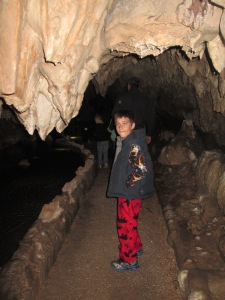 On December 30th we loaded up the car and once again headed west.  This time we drove 6 and half hours through landscapes becoming consistently less vegetated.  Slowly the trees where outnumbered by prickly pear.  Cat Claw Acacia, Creosote, and a few other very shrubby plants took over and finally a complete lack of moisture gave way to barren expanses of rock, dirt, sand and oil rigs.  The lofty rigs and big aggressive oil trucks were the only things we saw through the flat landscape until we crossed the border into New Mexico.  With  only 30 minutes of our drive remaining the view became hillier with soap tree yucca and prickly pear, while desert grasses became numerous and a grand desert mountain range loomed ahead with Carlsbad Caverns tucked somewhere in the landscape.  We drifted into White’s City Campground at the base of the Guadalupe Mountains.  We were the only tent campers there with the entire desert to ourselves.  This may be due to freezing evening and early morning temperatures in the 20’s…

On December 31st we hopped in to the car and drove the several miles up the hill to the entrance of the Carlsbad Caverns National Park.  Carlsbad was huge.  The immensity of the Cavern chambers was not what any of us expected.  Our birthday boy, Elias explains the caverns as “fun….very fun”.  Elias goes on to explain.

“The Stalactites and the stalagmites going together were awesome, I loved them.  It was VERY big.  It felt like a different planet.  I’m still not believing it was real. I really liked the underground ponds and the curtains.  Like when you put your flashlight up to them it shined through them and you can see red.”

We all learned the quick way to remember the difference between the cave formations from our guide, she said the stalactites hold “tight” to the ceiling and you need to be careful of the stalagmites as you “might” trip over them as you walk.

The enthusiasm Elias was showing made it all worthwhile for me.  I am not a cave person; my favorite parts of the caves are the entrances where all of the living things are found.  In Carlsbad Caverns for example the entrance is huge and hosts one of the coolest natural shows on earth.  Every sunset for half the year thousands of bats pour out of the entrance to this cave creating what looks like a sunset plume of smoke for miles in every direction.  Unfortunately we were not there for the show, but we were there for Elias’s birthday and he was very happy about that.  The actual birthday was on the first of the year and our plan for that day was to take it easy around camp, open presents and enjoy the day slowly.  The big party, the big birthday bash that Elias would remember forever was going to all of those cool caves. 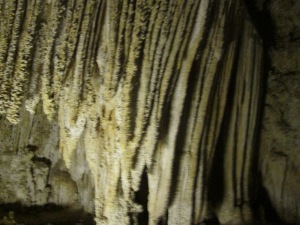 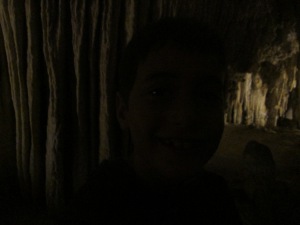 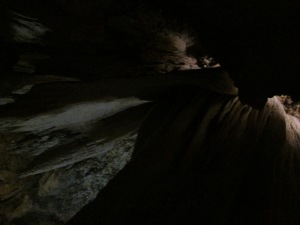 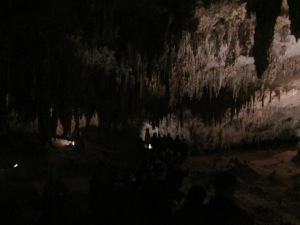 To end the day Elias and I hiked a trail from the visitor center about three miles all the way to our camp.  A great walk marked by a desert landscape he was just being introduced to.  We celebrated the New Year of 2014 around 8:30 pm which was about an hour past our family bedtime. We usually go into our tents when it gets dark and rise after dawn. This night we sat around a fire, watched the stars, reminisced about our crazy year to date, shared gratitude for our life, our family and friends and thought about the year to come. 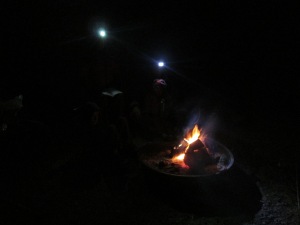 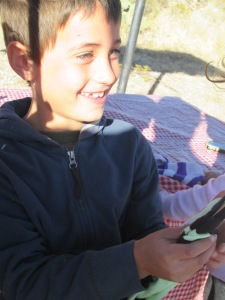 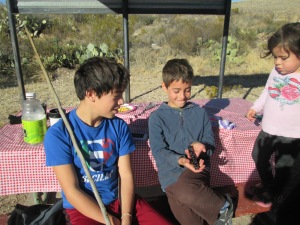