Posted on April 17, 2014 by josephandmichelle

At 18 I was attending a University too similar to my high school. My snot would freeze in the northern New York cold as I stepped outside in the early morning to attend 8:00 AM Calculus. Scurrying from lecture hall to lecture hall I couldn’t get into classes that appealed to me, I felt lost in the frenzy of fraternities and sororities. After completing my finals in December of my 3rd quarter I came down with bronchitis that seemed to be heading towards pneumonia. I felt like the illness was a spiritual crisis in disguise and chose not take meds to heal. Instead I sat, I thought, I cried and although my parents threatened with everything they had to keep me in school I dropped out (an act so foreign to my upbringing and decision making). I began to listen to a deeper part of me that spoke louder than my parent’s fears (and my own fears). Simon, my brother and I borrowed a friends van, drove up to the University while everyone was on winter break, packed up my things, went on a big hike to say good bye to the forests behind my dorm and ended the Upstate NY chapter – one of the more powerful and independent decisions in my life. It felt like my soul came knocking and redirected me towards giant chaos and unfamiliar terrain. A ferocious balance of trust, courage and audacity moved me forward towards the next step.

After dropping out I found Prescott College (PC) located in Prescott, AZ. I remember reading the PC handbook over and over with its photos and bio’s of faculty but it was the photo of the student body that resonated with me.…I found my people. Prescott was filled with students like me, slightly older and often with a bit of previous college under their belt asking quintessential questions left unexamined by more traditional institutions. Before it became trite the motto of PC was “learning is a journey not the destination” and truly that was my experience. After years of being educated, this was where I learned how to learn.

Hopping into a car with an acquaintance also enrolled to start Prescott College we drove away from Long Island August 1995 for what could have been a different planet in landscape and culture. It is notable that upon arriving in Boulder, CO a few weeks into our drive on our way to AZ we heard the news that Jerry Garcia died. Joining what felt like the entire city, we mourned…so many changes.

The transition to PC begins for each student with a 3 week Wilderness Orientation which for me took place in Barbershop and Tonto Canyons of Arizona. Shouldering our backpacks filled with gear stuffed into thick trash compactor bags making our backpacks buoyant, we floated and swam down gorgeous dessert canyons. As a child my family and I went camping at places on the East Coast like Yogi Bear Parks sort of KOA style. I hiked and backpacked a little at summer camp however I was pretty green to wilderness backpacking. The PC Orientation, formative in so many ways was my introduction to backpacking, the Arizona wilderness, student-directed learning, and was where I met great friends including my future husband, a long haired, goofy 19 year old Joseph. Everything was so new and foreign. 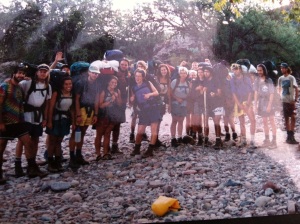 The years that followed were spent hitchhiking “up the hill” to Groom Creek where I lived in a tiny cabin in the pines a few miles outside of Prescott with a changing cast of great PC friends. These years marked my rites of passage into early adulthood. This is where I learned how to listen, how to trust myself, and I developed a resonant and intimate relationship with nature. Studying alternative education and eco-psychology I was planting the seeds for a career in counseling, a passion for “right education” for myself and my children and an experiential relationship with nature. As we travel around the country stopping to visit our PC friends and alumni, I recognize in them the passion that optimizes the PC student; professionals on the fringe of dominant culture, successful in the arts of organic farmers, sustainable builders, midwifes, educators, Park Rangers – independent, whole hearted and creative humans.

Stepping out of the car 2 decades later, footfalls on pine needles amongst the granite boulders of Groom Creek, I flashback 18 years – the crisp feeling of freedom rushed into my breath, my body and my spirit. Was this me? A faraway and forgotten friend, covered up by newer layers of self… mother, wife, counselor, daughter. It’s as if whispers of my past flooded in on the familiar vanilla scented Ponderosa Pine breeze reminding me of my independence, freedom and vision of my younger self. Are these qualities still at play in my life now, with my kids, my husband, my inner world? I ached to share this part of myself with my kids and at the same time wanted to run into the forest and seek refuge for a while to reconnect with who I have become.

Yet here we were, Joseph and I wanted to share with the kids Prescott and our college, the town and the woods where we met and began blending our lives together. We rented a house for the duration of our Prescott visit with the family, a little cottage walkable to downtown and Whiskey Row. The house was stocked with all sorts of delicious foods by our college friend, Mark, who still lives here in Prescott. As we eagerly munched on the hors d’oeuvres we explained to the boys that our mystery friend Mark is Cody Lundine’s right hand man and helps to run Cody’s Aboriginal Primitive Living Skills School. For our family Cody Lundine is a household name from one of the few TV shows that we catch on Netflix : Duel Survival. Joseph took Cody’s Aboriginal Living Skills class years ago at Prescott and he is sort of an Anderson Superhero.

Just minutes after arriving Joseph received a text from long lost friend Tim Murphy, Joseph’s college roommate and best man at our wedding who lives in Durango, CO. We haven’t connected with Tim in 10 years. “Where are you guys on your trip?” read the text. Joseph answers “We just got to Prescott, we’ll be in Durango in about a month.” “I’m in Prescott” Tim answered. What were the odds? “The force is strong with you…” Joseph responded. Within the next hour Tim, Mark, Leta (Mark’s Wife) and our family were reconnecting at the Prescott Brew Pub. The boys eagerly listened to goofy stories about us as college kids from Tim and to Mark’s. Mark became the primetime show while recounting behind the scenes details of Dual Survival and the life of running an aboriginal living skills school.

Prescott College has changed over the last 20 years still an experiential, environmentally based liberal arts school but now with a campus. For us it was strange to see our Prescott College with actual dorms in the lot behind the riparian area and built library, classrooms and café. Everything was built using sustainable building practices and materials. The college is ‘walking its talk’ moving towards a zero waste campus. Students tend to be younger now seemingly still appreciating the dynamic and experiential approach and the mission of the school.

Introducing PC to my kids made me appreciate our year of “Adventure School”. As we are homeschooling all year, their curriculum is a a dynamic mix of classical studies with experiential learning related to our travels, geography, geology, art, culture and history mixed in. They are learning like we did when we met, engaging their curiosities and creativity and together searching for meaning. They are 2, 8 and 12 we were 19 and 20. I realized that so much of the invention, adventure and fortitude of this year’s family adventure was spun and learned during our time at Prescott. These are the qualities that we hope to share and model with the kids forever.

Family climbing at the Dells and at Sullivans Canyon, hiking Spruce Mountain and having breakfast at the Dinner Bell brought back similar reminiscing of the past. If I squinted my eyes, I could have sworn that the group of 5 young guys climbing beside us in the Sullivan’s canyon was us 20 years ago. Such de ja vu felt shocking…2 decades have passed.